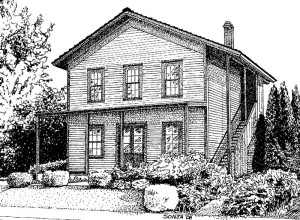 The Original Wasco County Courthouse was commissioned in 1858 when Territorial Wasco County reached from the Cascades to the Rockies. It was completed in 1859 just after Oregon became a state and the county lost more than half of its original 130,000 square mile area. The building was originally located on Third and Court Streets where The Dalles City Hall now stands. It housed the Sheriff’s Office, Clerk’s Office, and three jail cells on its first floor. The upstairs Courtroom hosted public meetings and church services during its early years, as well as being the seat of law for the entire county. Its only access was from the outside stairwell. During its 150 plus years, the building served in various capacities from Courthouse to City Hall, and for many years a boarding house. Located at seven different locations it was saved from destruction in the early 1970’s and has been restored as nearly as possible to its original dimensions and configuration.